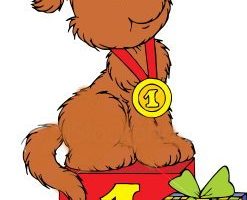 Some of our members subscribe to the Bas Rouge and as they read the show results. They may wonder about the numbers sometimes added to the dogs’ names.  These numbers are ratings, on a scale of 1 to 6, with 6 being the highest rating a dog can earn.

0: Dog is registered on L.O.F. and not yet confirmed.

1: Confirm or confirmed: is given to a dog that has passed confirmation.  Confirmation is the first evaluation a dog is given, at a year of age at the earliest.  At that time, the dog only has a Certificat de naissance, he will be issued a final pedigree that will allow the animal to be bred if he is deemed conform to the standard and shows a stable temperament.

Several faults will prevent the dog to be confirmed:

2: Premier choix or First choice: goes to a dog that has been confirmed and has earned an excellent in temperament test.  The dog must have received a Très Bon (very good) or an Excellent in conformation.

3: Excellent.  The dog earned an excellent both in conformation and in temperament in a National Specialty Show.

4: Recommended on the appearance.  The dog has been selected among the best dogs rated excellent (3) in a National Specialty Show and has also been rated A (free of dysplasia), see the caption dys. A on recent pedigrees.

5: Elite B.  Recommended on the progeny. The dog is not rated 4 but is free of hip dysplasia and is rated for the quality of its progeny, see explanation that follows “6 – Elite A”.

6: Elite A.  Recommended on the progeny. The dog is rated 4 (on his own quality) and also on the quality of its progeny.

N.B.: The above ratings do not apply to animals that are registered with no known background.  Such dogs can only receive the rating 1 (confirmed) and the rating 5 if their progeny has proved to be of the quality described above.