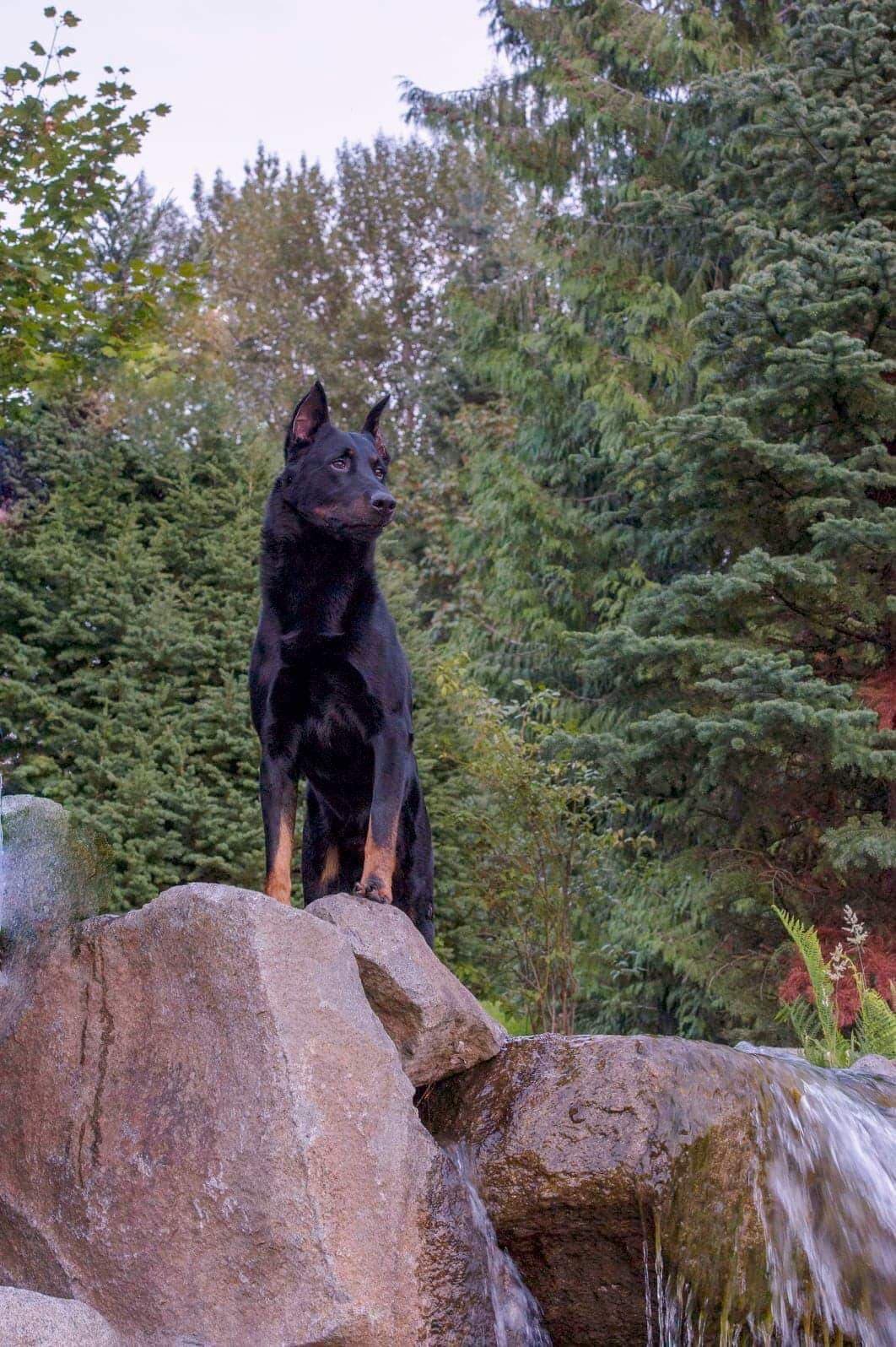 In the dog world, and individual breed communities, there are special dogs that stand out . They can be famous for many reasons, whether it be the records they hold or the people they touched.  Gideon was one of these dogs. He is a legend in the Beauceron world and started the love affair of Beaucerons for many.  We lost Gideon this past year and I can say with confidence that it was a loss that was felt by more than those closest to him.

Owned and loved by Marlene Palmer, Gideon was purchased as a Search and Rescue prospect and for the first few years of his life SAR was his only job. At 11 weeks old, he started his training and by 14 months he was certified in Wilderness Air Scent with the Klamath County Sheriffs K-9 Unit. He worked for many years before his owner retired from the field. When speaking with Marlene she told me about a story where they were called in to find a little girl that had gone missing. She describes that area they were working were not ideal due to the number of dogs in the area. The dogs were vocal, territorial, and lacked proper restraint. Gideon signaled Marlene of the girl’s scent and the authorities were radioed in. The little girl was found under a house and when she came out reprimanded that SAR group very vocally by saying, “I’m so mad, I weren’t lost…I was hiding …and you ruined it!”. The SAR group was amused, and the parents were relieved she was found safe.

On the advice from his breeder, Karla Davis, Marlene kept Gideon intact. Karla wanted to ensure that if Marlene changed her mind to show Gideon that she would have the chance to do so. In the beginning Gideon and Marlene continued to work as a team. Together they acquired his AKC Championship and Grand Championship. After their retirement from SAR Marlene decided to have him specialed with handler Tony Carter. During Gideon’s show career, he accomplished tremendous success. To this day he still holds the title of “Most winning Beauceron in AKC History.” He was the first Beauceron to achieve a Gold Grand Champion and one of the first Beaucerons to Champion in Canada. He was the American Beauceron Club’s National Specialty winner from 2013 to 2016, Westminster’s Best of Breed winner in 2015 & 2016 and won the Best of Breed at the 2016 ABC Journée . For four years in a row Gideon was the #1 Beauceron in the country. During his legendary show career Gideon won nine Best in Shows, one Owner-Handled Best in Show, four Best in Shows in Canada, 16 Reserve Best in Shows and 76 Group-1 placements. He is  the only Beauceron to win a group placement at the Royal Canin Eukanuba show in Florida and still holds the most Grand Champion points with 740. It is undeniable that Gideon loved the show ring and will remain one of the greatest show dogs this breed has ever seen.

Aside from his amazing careers in both SAR and the conformation ring there was so much more to Gideon. He was a beloved member of not just Marlene’s family but Tony & Amie’s as well. When he was at home with Marlene they enjoyed hiking, herding, playing with other dogs and just lounging on the couch. He was a best friend and protector to his Frenchie sister, Audrey. He participated in other sports as well, earning his Coursing Ability, Barn Hunt, and Herding Instinct Test. When he wasn’t with Marlene, he spent his time with his other favorite people, Tony Carter, Amie McLaughlin, and Rylee were his family as well and he was their beloved pet. He slept in their beds with them and was spoiled with puppuccinos. He let Rylee be a Rockstar in the junior’s ring and brought comfort to Tony when he was battling cancer. One story that stands out to is when Gideon met an older gentleman named Charlie at the airport. Charlie had a German Shepherd named dog named Ben when he was in the Korean War that saved his life. Gideon reminded him so much of his dog Ben that he went to his knees, buried his face into Gideon and cried. Gideon was gentle and kind and he was always there when he was needed.

When I decided to write about Gideon my first thought was, how was I supposed to write about a dog I have never met? As I started to write I realized that I did in fact know him. There is something amazing about a breed community and the show world,  it allows owners to share their dog(s) with the rest of us.

This is what Marlene did for so many of us and for that I want to thank Marlene and Tony for sharing him. Though he is gone in body he will never be gone in spirit. He will live on in the records that he set and the offspring that will continue his legacy. There will be other great dogs in the future of our breed but as far as legends go there is only one. Rest easy Werewolf <3