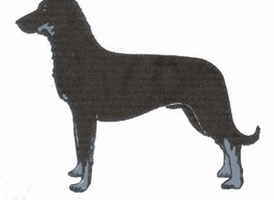 The following are comments written by M. Maurice Hermel for the FCI Standard #44 published on 10/25/06. They were approved by the Club des Amis du Beauceron (CAB) board at the Nationale d’ Elevage.

M. Hermel is the head of CAB’s Judges Committee (in charge of educating aspiring judges) and was the conformation judge at our 2007 Journée du Beauceron. His comments were translated by C. Batson

The Beauceron is not a heavy dog. Many judges often tend to forget this, confusing power (one of the breeds traits) and heaviness. It is the dog seen on the logo of the Club des Amis du Beauceron that we must keep in mind when we evaluate the breed.
That is to say: 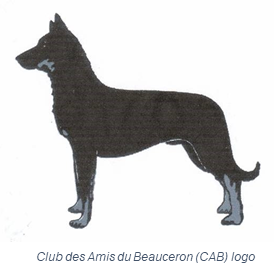 This last trait gives the dog elegance –despite his power- and goes hand in hand with an excellent angulation of the shoulder and arm. If this angle is too straight, the shoulder joint is pushed backward, the forearm is too vertical, the shoulder blade is higher, the neck is pushed forward and the dog looses its nobility. The head carriage becomes mediocre.

These points must be present in the general appearance of the dog within the standard (it is often said that the dog is a whole and that the first glance often brings the final judgment!)

Once more, we must never forget that: “The breed shows in the head and that all the rest follows.” (P. Megnin, 1899, one of the most famous zoologists in the world.)

The head must be without fault for the dog to be rated excellent even if the rest of the body is excellent.

The head is the last refuge of the breed’s type. The standard describes it very well, but we must specify that the head must be:

III. Chiseling
It is very important that the under orbital area be well chiseled and dry.

The head is made of two rectangular parallelepipeds fitted into one another, the bigger one for the skull, the smaller for the muzzle, making all the lines of the head parallel or perpendicular. This is expressed in the standard by:

All these elements point to the importance of the chiseling in the Beauceron head, for if it does not appear, we are in the presence of a common head, which is not representative of the breed. (See Diagram A)

A head showing a short muzzle, concave profile of the head is not correct. 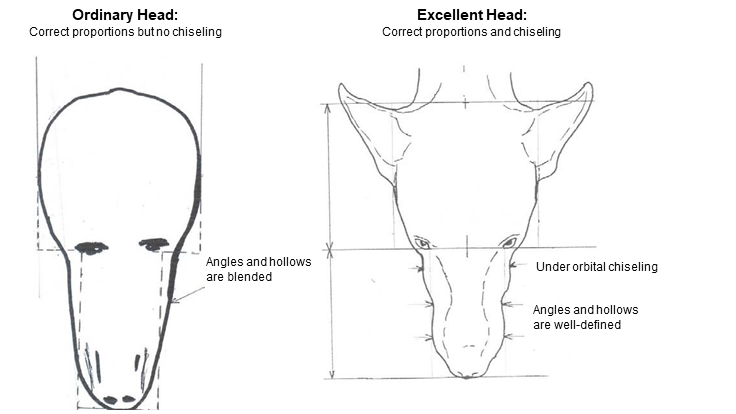 Their shape is well described in the standard. We must penalize eyes that are pulled to the side and remind you of “Chinese eyes.” The expression then becomes incorrect for a sheepdog, for a frank direct look cannot be obtained with a sidelong glance or slanted eyes or narrow set eyes.

1. Eye color for the black and tan coat:

2. Eye color for the Harlequin coat:

Partially yellow eyes cannot be allowed on Harlequin dogs, just as they are not for the black and tan dogs. It is very clear, yellow eyes will cause the dog to be rated “inadequate.”

The problem lies with the natural ears. We have to examine the ear set and evaluate its texture (thin enough.) Like the cropped ears, they are not divergent, hanging low on the cheeks and they must measure half the length of the head. The ear set tends to project the ears forward. (See diagram B)

DIAGRAM B
V. The Ears

It consists of the back and the loin. It is straight and horizontal from the withers to the iliac bone (beginning of the croup.) To achieve a correct topline, muscle mass must fill all the space between the vertebrae as they do not have apophysises of equal size. In fact they are angled in opposite directions, forward and backward. The point where their angulation changes is on the 9th dorsal vertebra which does not have an apophasis. It is also called the “anticlinal vertebra.” The first eight vertebrae are angled forward, the last four along with the lumbar ones are slanted backwards. Muscles must fill the volume between the three apophysises of each vertebra. This prevents to notice a dip of the topline at the 9th vertebra. (See Diagram C)

This must not be confused with sway back, which is a general concave curvature of the back, and far more serious.

Conclusion: A sway back is a general drop of the spine, not at all the depression seen on the 9th vertebra of a dog lacking good muscling of the back.

It must be oval, full; long never cylindrical not at all shaped like the keel of a boat. It blends into the flanks.

The floating ribs 11th, 12th and 13th) are long permitting good volume of the chest. Short floating ribs would be an important fault.

The chest shaped like a ship’s keel is caused by the shape of the ribs and is an inherited fault. Therefore, take heed and avoid the transmission of this fault!

It is not worth spending time on this problem. All judges easily recognize a croup that is too slanted and would change the hindquarter’s angulation.

The Beauceron is a trotter, not a runner or a canterer.

As far as they are concerned and to complete what I was stating at the start of these comments, we must be very watchful. Too straight, they make the dog taller and characterize runners not trotters. Such angulations must be penalized. (See Diagram D) 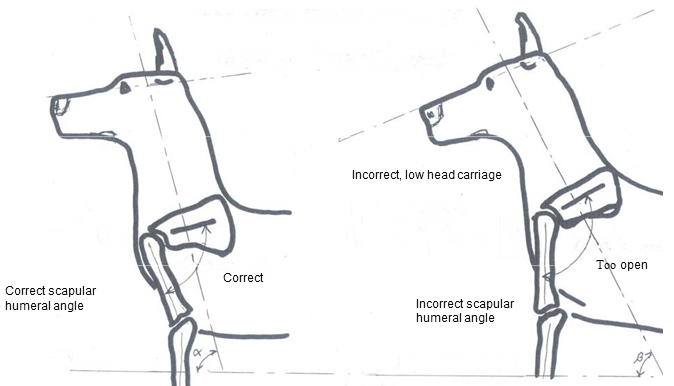 Many old judges would say: “a dog is a head and a tail!”

The tail must be strong and large at the base. A thin tail is the sign of a light skeleton, which is also an important fault.

The tail should be carried in the shape of a J, we must be tolerant with a high carriage, but it must never be carried above the topline or curved over the loin.

NB: Nevertheless, it is a fault, not as important as the faults of the head, but too much tolerance of a poor carriage generalizes a fault that is very difficult to correct after it has become a habit.

One of the main faults is when the feet are not aligned. We must always be watchful of this, because this fault is repeated from parents to progeny.

Another fault is poor feet i.e. not tight, compact, in short flat feet.

NB: It is very important to examine feet in action, for it is possible to notice these faults when the dog is moving.

The markings’ color is essential for the dog to be of good quality. Markings should be deep rust. Light markings must be penalized depending on the degree of lightness. This is well described in the standard.

NB: Too invasive tan markings must be penalized, but the fault is less grave than their disappearance.

Undercoat: It is one of a sheepdog’s traits. It must exist, even if it is thin. Too much undercoat is incorrect but less than it lacking. It is up to the breeder to keep an eye on this problem and choose his breeding stock wisely.

All points covered in the standard have not been discussed in these comments, we did not want to write a “remake.” In fact, a judge knows how to respect the standard when it comes to the teeth and the dewclaws, the Beauceron standard is precise on these points.
We have only highlighted the important point-sometimes with pyrotechnical explanations, which, without being specific traits of the breed, are nevertheless essential to judge a Beauceron without committing serious mistakes.

This text will give new judges – and older judges who will take the trouble to read it- guidelines to avoid overlooking main faults in judging the Beauceron.