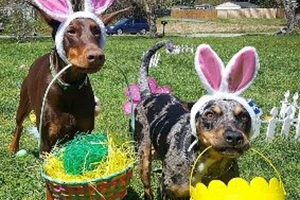 Yoshi – Yoshi was pulled from a high kill shelter as a 5/6 month old puppy, this beautiful Beauce mix boy was found in an abandoned house and brought to a shelter by the animal control officers. They contacted Beauceron rescue and we were able to place him with his perfect human! Here is what she what to say.

Yoshi is the greatest, he was adopted in October of 2016 by a dog trainer. Yoshi now teaches all of the trainer’s basic and advanced obedience classes and lessons and is a model student. He is a quick learner and loves to be involved in everything from obedience to agility to retrieve. The best part about Yoshi though is how much he loves everything. People, dogs , and children of all ages, Yoshi greets everyone with a lick.