Age: 23 and Rowan is four months

How long did you research before adding a Beauceron to your life? Roughly two years between finding out the breed existed to bringing home my first Beauceron.

What did you do to prepare?
I became an active “lurker” in all the Beauceron Facebook pages, asking questions I couldn’t find in the search features. I met several Beaucerons at the MTB in Orlando as well as in sports I was already involved in with my other dog. I also pestered my eventual breeder to no end with constant questions about the Beauceron world (Sorry Lauren!) and she was happy to answer all of them and continues to do so. I dog train as a side job and used to do it professionally so through working with hundreds of dogs and different breeds, I knew that the Beauceron was a breed that matched my skill level as well as my future aspirations which helped me prepare a lot for bringing one home.

How did you find your breeder?
I found my breeder online through a combination of Google, Facebook and Instagram. After the Royal Canin MTB in Orlando, I proceeded to research the breed online which led me to Armored Rose. Then I met Amy with Ozark on Instagram and through her and Facebook I found Lauren of Vaillant Feu Beaucerons. She was not the first breeder I came across, or even sent an application to, but she was the most willing to answer my questions and she was the one I made the best relationship with over the two years of research I did.

What goals do you have?
My big goals for Rowan are training successfully in SAR and herding. We are open to all different kinds of sports though so we will be dabbling in many of them such as conformation, agility, and maybe even some FAST CAT.

What is something that you were not ready for with your Beauceron?
This is a hard question for me to answer because everything has been so easy with Rowan. He hasn’t thrown many curveballs and has overall been the easiest puppy I have ever worked with. Come back to me after his teenage era!!

What is easier the you had expected about owning a Beauceron?
Rowan’s temperament and mitigating that. So many people gate keep this breed saying that they are a lot to handle. And while I do believe my training background has given me a leg up with Rowan, I was prepared for a difficult puppy and that’s not what I received. I could not be happier with Rowan’s temperament first and foremost. His genetics and early handling by his breeder have been proven time and time again and I cannot wait to see how that plays out in maturity.

If you had to give advice to someone coming into the breed what would it be?
1. Don’t believe everything you see on Facebook. Facebook can be an extremely dark place and too many good breeder are being drug through the dirt for situations most people don’t understand.
2. Do your research of the breed and breeders based off of fact and first-hand accounts. Ask for proof. If the proof looks sketchy, get a non-biased second and third opinion. If you are not “dog savvy” consult with trainers/breeders in and outside the breed. You can never have too much information when it comes to such a huge investment.
3. Be honest with yourself and your breeder. This breed has been such a blessing to my life but I can see where they are most definitely not the breed for everyone. Be honest about your skill level and aspirations.

What do you think we need more of in the community?
An understanding that there is a difference between trivial Facebook drama and real ABC member issues. We have to remember that ABC is not a Beauceron fan club. It is a non-profit organization that has rules and regulations that should be followed and upheld by its members, breeders, and BOD. Unfortunately, that means citing people who we love and respect, for not upholding the rules or outright breaking them. It’s not personal if you don’t make it personal. If you don’t like the rules, work together to change them.

Is there anything that you would have done differently so far?
With my Beauceron journey, I wish I had done more research on importing and breeders in Europe. I was very close-minded to the idea of importing and through talking to many people who have done it, it’s not as scary as some may think. I hope to learn more about the European lines and hopefully import one one day.

What are some things you are looking forward to in the future?
Being an active member of the club, the Facebook groups, and hopefully an asset to the newbies in the breed. Coming into this breed can be scary and I truly hope to be a relatively non-biased sounding board for those who are just now discovering this beautiful breed. I also hope to represent this breed well through making Rowan the best version of himself that I can. 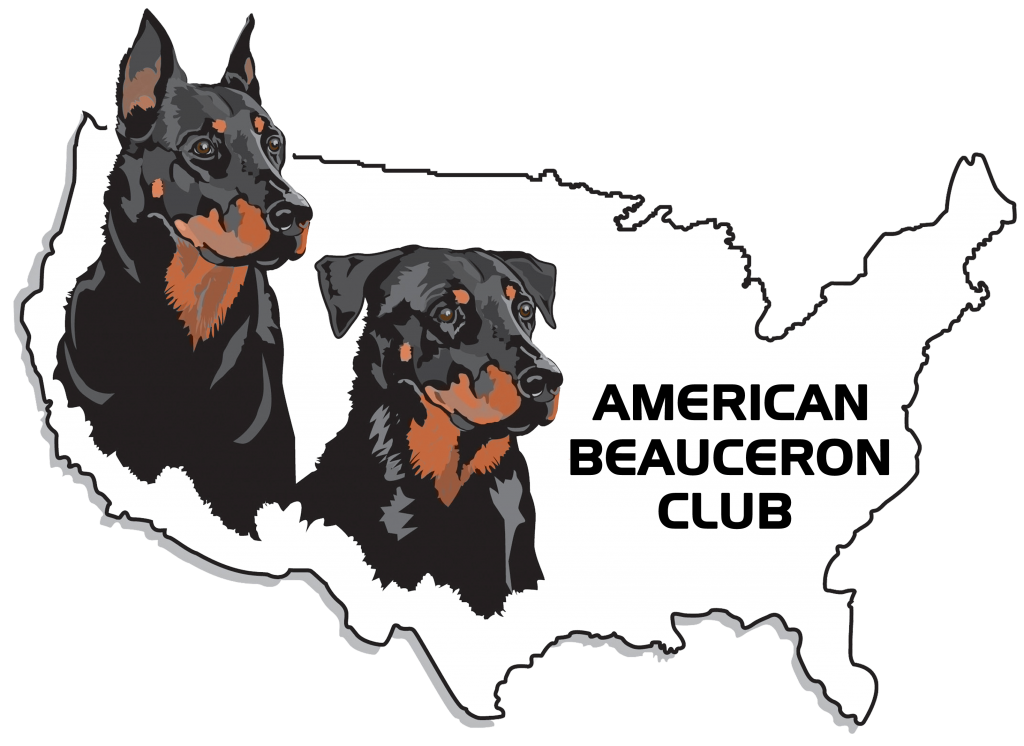 I have been involved in the breed for a little over three years now. I joined the American Beauceron Club (ABC) before bringing a Beauceron into my home. You might be asking why I joined before even owning a Beauceron. I wanted to get my foot in the door and show the community that I was serious about adding one of these amazing dogs into my life. Although I owned purebred dogs, I had never been part of a breed club and wondered what it would be like to join.

Being part of a breed community is so much more than just joining a club of like-minded people. It’s getting involved on a deeper, more meaningful level. A breed-specific club is not just a camaraderie based on ownership of a specific breed, but a “celebration of the breed” by enthusiasts, as Beauceron owner and breeder Craig McCracken said (The Beauceron Bulletin, Volume VI, Issue 2 [2004]).

There are numerous benefits to joining the ABC, or any breed club:

I wanted to be able to participate and contribute by going to ABC events, joining committees, etc. In my short time in the ABC, I have been to numerous events to represent the breed and club, such as Westminster’s Meet the Breeds, assisted with the rescue raffle at the 2018 National Specialty, and I helped run an ABC sponsored herding trial. Wanting to get even more involved, I volunteered to chair the Ways and Means committee. In doing so, I gained hands-on experience with the 2019 and 2020 National Specialty events by creating welcome bags and finding souvenirs. As the chair, I also oversaw the creation and production of the 2020 ABC calendar. While that was a very involved and tedious project, I learned SO much! I got to know a lot of dogs and learn about their breeders, pedigrees, owners, and the great things they accomplished. I took my club involvement a step further and ran for the Region 1 Director to the ABC Board of Directors (BOD). Since joining the ABC, I have had more opportunities to work one-on-one with other club members and have gained a lot of new friendships. You open your world to new people and gain new friendships with whom you truly learn to appreciate the Beauceron breed.

By joining the ABC, you also gain the ability to advocate for the breed. Claire Roybal (Poissonniez) wrote:

The ABC is the voice and representation of our breed in this country. In arranging Meet the Breed events and Judges Education seminars, this club determines how our breed is known and perceived in the United States. As ABC members, we are the guardians of our breed’s reputation in a nation where some breeds have struggled with wrong perceptions. In our club, we have the ability to agree upon a code of ethics for owners and breeders. How shall we protect the health, temperament, and type of our breed? It’s easy to talk about these things in online forums, but in the club we have the power to take these lofty ideas and make them so.

A breed club does so much more for the breed than non-members may realize. We have the ability to educate not only people interested in the breed or new owners, but judges too. From long-time Beauceron owner and ABC member, Elaine Giannelli, ’The club is responsible for writing and making any changes to the breed standard by which all AKC judges judge the breed. The ABC is responsible for the training of AKC judges through the club’s judge’s education program. They put on seminars and present the breed at judges’ institutes.

Additionally, ABC members get some tangible benefits too! The ability to submits photos for the annual club calendar, discounts on entries in the National Specialty and other supported events and gear, the bi-monthly club publication The Beauceron Bulletin (including all archived copies on the website), access to the club’s website and all content. ABC members are also eligible to receive the club’s Register of Merit and Versatility awards.

Keeping all of this in mind, why wouldn’t you join the parent club for the Beauceron? We have the power to continue to encourage the responsible breeding of purebred dogs and preserve, and better, the Beauceron breed. When considering joining don’t ask yourself, “What can the club do for me?” ask, “What can I do for the club.” Although intangible, for the most part, being a member of the ABC provides so many benefits. It connects you with others who care about preserving the authentic Beauceron as well as bettering the breed through better health testing or genetic research. It allows you to contribute in minor such as participating in elections or voting on revisions to the COE, or in more significant ways such as volunteering your time, skills, knowledge, or expertise to assist the club. You should want to join because you want to do your part in bettering the breed. What begins as self-education about the Beauceron will evolve into public education. You start as a newcomer, and over time, you become the elder who helps guide and mentors the next generation. It is through the power of the breed club’s collective membership that we ensure the preservation of our beloved Beauceron.